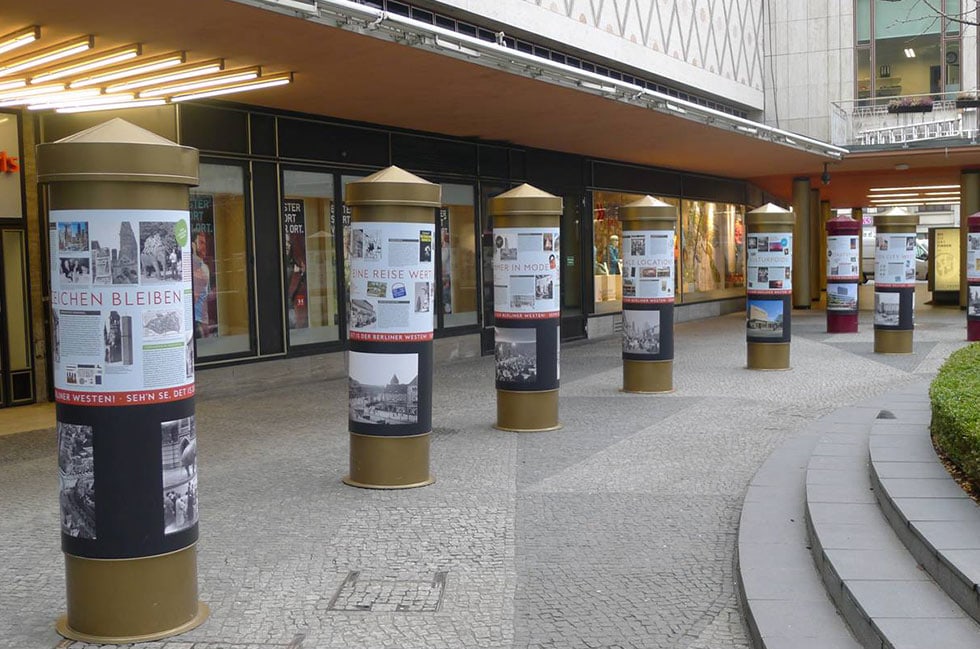 It was a small part of the Federal Republic of Germany which was of great political significance after the war: when West Berlin became a symbolic island after the Berlin Wall was built, many new and reconstructed buildings had to meet this high standard. The Berlin-based architecture firm, MASKE + SUHREN, commemorated this event with a small yet fine public exhibition on the typical Berlin advertising columns which could be seen in the Volierengarten (aviary garden) in the Kranzler Eck from 7 March to 7 April 2017.

The exhibition traced the fascinating transition from the “New West” to City West and offers a view of the changing neighbourhood around the Kaiser-Wilhelm-Gedächtniskirche (Kaiser Wilhelm Memory Church), the Kurfürstendamm, Tauentzienstraße and Berlin Zoo. Today, we perceive the City West as a business area, an enchanting place people long to visit, an area for strolling and amusement, a shopping destination and stronghold for the hotel business – a vibrant, urban centre of Berlin! The Kranzler Eck acts as a modern exhibition venue, confronting visitors with modern architecture, moving history and a long-standing tradition.

Winter lounge at the Kranzler Eck Berlin: charm and charity

The innovative icon of Ku’damm where history and future meet. So Berlin.